1st Grace has the privilege of partnering with our local food bank to meet the physical needs of our community. Every year we are blown away by how God chooses to use our volunteers and financial assistance to expand the outreaches of this vital ministry. To get a feel for the impact taking place, read these reports from our involvement this past year....

Many praises for the ongoing basic provision that keeps the Vandalia Butler Food Pantry open month after month.  The Fall Food Drive was the most successful they ever had with a mountain of food given!   We have a very generous community who give and give and give~

As we started the month, one of our own was in severe pain with Shingles.  Shirley Cook had come down with it and was taking narcotics to help with the pain. The last Sunday of October she came to church in pain,  said she didn't want to take any pain medication because she was driving, but the pain was unbearable.  I prayed with her about the pain and the pain left.   She said "it's not hurting now" and on Wednesday at the pantry, when she came in to volunteer, the pain was still gone.  By the end of the month as I write this, pain still gone!  Praise the Lord!  Shirley faithfully worked many days with us at the pantry this month.

The number of people we served was far greater than previous years.  We prayed with just about all of them.  Not one person refused prayer, in fact the majority responded so positively...."Yes...please pray for me!”  You'll never find folks who are as willing to receive prayer.  Most had overwhelming problems in their lives, some through their own poor choices, some from tragic events and some a combination of both.  I feel that our prayer time with them is some of the only prayer in their lives.  They all desperately need Jesus, though most don't know it.

There were 125 turkeys/ hams given out, along with ALL the fixings.   Each turkey fed a group....perhaps feeding 600 people total.  More important, those turkeys brought more people that typically would not have come.....but more people who got prayed for!

We had 4 people officially accept the Lord Jesus as Savior.  Most did NOT have a church home but thought they should find one.  An invitation was always extended to come to First Grace.  Many had previously accepted Jesus into their heart but were distant from God or any church connection.

Something that caught my eye was how God brought the right people together.  Donna Cupp mostly gathered the food items needed...the turkeys, the can goods, etc.  What she and Eddie, Pat and Bob did was huge!   As she was dropping off food, she was walking by a person receiving the food and she stopped a moment to join with us in prayer.  The woman explained what was going on in her family and "by coincidence" it was something Donna could speak wisdom into.  After prayer and sending the woman on her way, Donna said, "funny how I was there to contribute"  Love those God-appointed “coincidences!!”

The night  Bryson, Brent and some teens came in to work....they were receiving instructions and I told them that I wouldn't be surprised if there are moments that the teens would be able to speak into the situations we are praying about.   That evening most of the families who were served had teens.  One family had teens that Bryson knew because they had come to Wednesday night activities at First Grace a while back…miraculously, Bryson was able to speak very personally to this Mom! 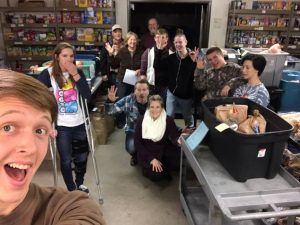 When Tim Divens, Jojo and Simon served, we had more young families come in.

The Lord, time after time, brought the right words and the right Scripture to mind as we encountered one issue after another…some really tough issues.  One of my favorites.....a woman, maybe 55 years old,  told me she was really struggling with alcohol- it was calling her back.  She had stopped drinking the first of November and it was now the day before Thanksgiving.  All of her family shuns her because of her poor choices.  So I wanted to encourage her with

Jeremiah 29:11.  “God knows the plans He has for you....”  Her eyes lit up and she got out her wallet to show me something.  She had a credit card-size Scripture card of Jeremiah 29:11!  This card was the ONLY  thing that was not burned up when she was in a car accident three years ago and her car went up in flames (she was driving drunk).  This Scripture card was burned all around the edges and a bit in the middle but NONE of the words were gone!   Wow...was God really trying to encourage her!  He DOES have a plan for her.

Another favorite story was a man who, when I asked if I could pray with him said, "you prayed with me last year" He then reminded me of his situation.  I told him that I  remembered his story.....his two adult kids moved back home with him and both are addicted to heroin.  A year ago he was in total despair over the situation.   He was now standing before me telling me that after we prayed that both kids just stopped the drugs without rehab and have been drug free for a year!  He was beaming!  It was an awesome testimony that I shared with many others this month.

This year at the pantry I prayed for so many families struggling with heroin.  Just in ONE day I prayed with four different families.  One lost a 26 year old granddaughter in April who had gone through rehab and looked like she was going to make it, but went out with friends, did the heroin, and died.  Another young man had just gotten custody of his 2 year old child because his wife is addicted to heroin, the wife kept trying to get him on the drug.   One family found their son in the basement dead with a needle in his arm.   Another older man who smelled very strongly of alcohol asked for prayer for his son on heroin,  so we prayed for the son, then I asked him ..."and you have a problem with alcohol?"  He agreed and asked for prayer also for his girlfriend because she's an alcoholic.  In all these situations I was able to share about the man whose kids were delivered from heroin addiction after prayer!!

A 60ish age woman struggling to hold her family together...her son just lost his 35 year-old wife.  They have 5 children under 10 years of age.   The son's wife died of a blood clot and the 10 year-old son found her.  The Grandmother is trying to care for the children but she only lives in a trailer. Her son, a truck driver and was always gone and didn't know how to care for the children.  The Grandmother tells me she's so tired and that she herself is a cancer survivor.

Another story....A young woman caring for her 30 year-old brother’s 2 young kids along with her own two young kids.  Her brother in the hospital with a failing heart and may, possibly, need a heart transplant.  The brother is a Youth Pastor but didn’t know what church.

Victory Stories ...You know how I love to pray for God’s healing...well...I think absolutely every BACK  I prayed for (and there were many)  saw the pain leave!   One after another.  I had two sisters who told me they each had back pain...so I prayed for both (at the same time…God can handle it)  and both had their pain relieved!  One evening I prayed for a man's rotator cuff that caused him pain.  After prayer he said it felt better.......but in the morning, a message on the pantry phone was from a sobbing woman who said she wanted to thank us for praying for her husband!  "Last night someone prayed for my husband’s rotator cuff and this morning he woke up with absolutely no pain and we are canceling his surgery!"  Awesome Lord!

This is only the beginning of what God can do as we are used as His humble servants!